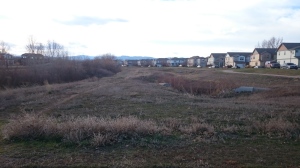 Most nights I go for a walk before bedtime, usually between midnight and 2am. In the summer when it is warm, my wife Cathy usually accompanies me. When it is cold, I walk by myself. Fort Collins has an extensive trail system and the Rendezvous Trail runs right by our home. It has a fairly wide open area along the trail with a creek that runs through it. Except when we are going through a drought, one can usually hear the babbling brook during the walk and depending on which route I take, I can cross it several times. It is a peaceful time to walk, seldom seeing anyone except occasionally on weekend nights during the summer.

Even here within the city I can see plenty of stars, sometimes meteors and planets. Often the moon lights my way, giving me a moon shadow. Sometimes I walk in the rain and during the winter there can be snow on the ground or falling. It is not as dark out when there is snow on the ground to reflect light from the night sky and streetlamps. It is especially bright when there is a near-full moon. Snow falling is always beautiful, quiet and peaceful as long as there is no wind blowing it into my face.

There are also wildlife encounters at night. Besides the natural area along the trail, when I reach the farthest point from home I am within a mile of several large lakes and the Cache la Poudre river. Often there are owls hooting, usually more than one calling back and forth. Sometimes I hear a pack of coyotes howling in the distance. Especially during winter, I hear Canadian geese honking every night, both from where they are spending the night on lakes and often flying overhead although they are seldom visible when flying at night. One memorable night I was walking with Cathy along the trail with the neighborhood townhouses on our right and the open area on our left. Suddenly a red fox came running out from between the townhouses, crossing our path and entering the open space carrying a rabbit in its jaws. That summer we often saw a red fox and the kits she was raising in the open space.

On rare occasions there is a little excitement. One night I was walking on the trail next to the townhouses when I came across a bicycle lying next to the path with a flashing headlight and nobody around. It was a dark night and off to the right, the ground drops off into a water retention hollow before rising up again and then dropping off into the creek. I didn’t see anyone but it was too dark to see if there might be someone injured down in the ditch. I jogged home, told my wife what I had seen and grabbed a flashlight to check the ditch. I couldn’t find anyone and continued walking down the trail. Near the spot where I turned around, there was another bike lying beside the trail. On the way back the bike with the flashing light was still there.

As I neared home, I could hear someone yelling. My neighbor and his girlfriend were in the driveway between his garage and mine. My wife had heard all the fuss and had come outside to see what was up. Someone had stolen three bicycles out of my neighbor’s garage and he was very angry. I told him what I had seen and all four of us took off down the trail. Sure enough, that was one of his bikes flashing next to the trail.  We continued down the path, searching both sides of the trail with my flashlight until we came to the second bike. We never found the third bike which he said was the most valuable one. Later that night he called the police and filed a report although that bike was never recovered.

A few weeks later, I was on my nightly walk when I reached a point where sometimes I turn around or have to cross a road and a bridge over the creek to continue along the trail. There was a police car parked on the bridge. Another patrol car pulled up and the officer got out. I decided to turn around and head back when the two officers, flashlights in hand started rapidly following me down the path. I stopped to wait and see what they wanted. One of the officers was the one who responded to my neighbor’s call about the bicycles and knew I often did late night walks.  Apparently, someone had called in a complaint, claiming they heard a loud noise that sounded like a gunshot. They asked if I had heard anything. I hadn’t and they turned around to go back to their patrol cars.

Most nights it is a quiet, peaceful walk that relaxes me just before bed. I especially enjoy the summer nights when I walk hand in hand with my wife. Those nights are also quiet and peaceful as we seldom talk, just enjoying the night air, beautiful sky and each others company.